A Year of Summer in The Lion City

A Year of Summer in The Lion City

Asia, Singapore
Hello! My name is...

Hello __ (n_ h_o) selamat pagi (morning) _______ (morning). I am from Lexington, Kentucky, also known as the “Horse Capital of the World” but this year I have hardly spent any time there, for I have spent much of the year living and studying in Singapore, a city-state located at the tip of the Malaysian peninsula in Southeast Asia just two degrees above the equator. It was a year of summer and adjusting to the extreme humidity, but it was also a year of academic and personal transformation, constantly learning and being exposed to new things from “fried carrot cake” (which is neither fried nor has carrots in it) and intestine, to new ideas pertaining to societal organization and government. You may have noticed that my greeting was in four languages. These languages represent the four official languages of Singapore (English, Mandarin Chinese, Malay, and Tamil), so you can imagine just how diverse Singapore is and the symphony of language that can be heard on a daily basis. These are just some of the sorts of things I am exited to share with you.

I am pursuing a Joint Degree in Geography with a concentration in economic geography from the University of North Carolina at Chapel Hill and the National University of Singapore. I have also traveled to Thailand, Malaysia, Indonesia, and Germany, where I lived with a host family for one month as part of a high school exchange program in a small town called Bernau approximately 30 min. outside of Berlin.

I have largely been trained as an economic geographer with research interests in finance, global cities, state/regulation theories, and theories of innovation. My job as a geographer is to understand how complex concepts such as “the economy” are conterminously constructed, deconstructed, and reconstructed through space. Thus my approach is largely interdisciplinary and avoids universalizing theories in favor of grounded site specific understandings of how the economy works over space and between places. So what does this mean for intercultural education? First, it means that I have a great appreciation for difference as it is often at the core of a geographer’s understandings of the world around them. Secondly, my focus on the relationships between places strikes at the heart of what it means to be “intercultural” for it is the interconnection of economies (multiple and variegated), societies, and cultures which are vital to understand the world we are all sharing today. Thus, an intercultural education is not only valuable but necessary as we become more and more connected, sharing in a new map of economic, social, cultural, and political activity which is in constant flux.

Additionally, despite my focus in economic geography I want to emphasize that geography is a field of inquiry which has a great diversity of research areas such that I have also studied regional geographies of South and Southeast Asia, urban geography (particularly as it relates to urban governance and urban planning issues), and ethnic geography (specifically issues of racialization).

Finally, I love sharing my academic and cultural experiences and enjoy engaging young people in ideas that challenge them to think critically about what they are being told and to understand how difference, especially cultural difference, is so vital for interpersonal understanding; an understanding which is vital for a fuller life and work.

I am from Lexington, Kentucky, also known as the “Horse Capital of the World” but this year I have hardly spent any time there, for I have spent much of the year living and studying in Singapore, a city-state located at the tip of the Malaysian peninsula in Southeast Asia just two degrees above the equator. 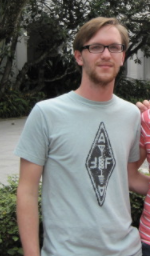