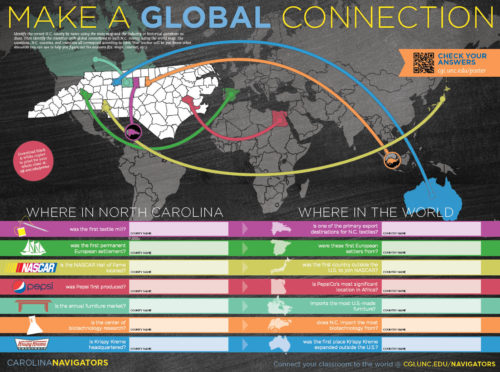 Did you find the global connections in North Carolina? Check your answers below! While you’re at it, why not sign up for our newsletter and take a look at our Carolina Navigator-created resources related to each country?

Download black & white copies to print for your whole class below!

*Click here to see answers to past poster activities!

Where in North Carolina…

…was the first textile mill? Alamance

…is the NASCAR Hall of Fame located? Mecklenburg

…is the annual furniture market? Guilford

…is the center of biotechnology research? Durham

Where in the World…

1. …is one of the primary export destinations for NC textiles? Dominican Republic

2. …were these first European settlers from? Spain

3. …was the first country outside the US to join NASCAR? Japan

4. …is PepsiCo’s most significant location in Africa? Egypt

5. …imports the most US-made furniture? Canada
6. …does NC import the most biotechnology from? Singapore

7. …was the first place Krispy Kreme expanded outside the US? Australia

>>The Alamance Factory was the first mill in the South to produce colored cotton plaid fabrics. It became famous for making Alamance Plaids.

>>Over the last 10 years the value of North Carolina’s textile component exports increased by 36%, faster than the US average of 18.4%.

>>Spanish colonial forces were the first Europeans to make a permanent settlement in the area, when the Juan Pardo-led expedition built Fort San Juan in 1567 at the site of the Native American community of Joara, near the present-day city of Morganton The fort only lasted 18 months.

>>Pepsi-Cola was created in 1898 by Caleb Bradham, a New Bern, North Carolina pharmacist who formulated the drink as a refreshing and energizing tonic. When the Pepsi-Cola company decided to export the drink to Mexico in 1907, other companies followed suit.

>>Furniture manufacturing has been a major player in North Carolina’s economy since the 17th century. Early industrial entrepreneurs and developers focused on the Piedmont region of North Carolina, especially the city of High Point, because of its abundant wood supply, access to transportation, and cheap labor availability.

>>The largest destination markets for NC biotech-related exports are Canada ($923 million; 26.8%) and Japan ($377 million; 8%).
>>The first Krispy Kreme store to open outside North America was in Penrith, Australia, in Sydney. Krispy Kreme now operates stores in 24 countries around the world.